Joy Harjo was born in Tulsa, Oklahoma on May 9, 1951, and is a member of the Mvskoke/Creek Nation.

Harjo received a BA degree from the University of New Mexico before earning an MFA from the Iowa Writers Workshop in 1978.

Her books of poetry include Conflict Resolution for Holy Beings(W. W. Norton, 2015); How We Became Human: New and Selected Poems (W. W. Norton, 2002); A Map to the Next World: Poems (W. W. Norton, 2000); The Woman Who Fell From the Sky (W. W. Norton, 1994), which received the Oklahoma Book Arts Award; In Mad Love and War (Wesleyan University Press, 1990), which received an American Book Award and the Delmore Schwartz Memorial Award; Secrets from the Center of the World(University of Arizona Press, 1989); She Had Some Horses(Thunder’s Mouth Press, 1983); and What Moon Drove Me to This?(Reed Books, 1979). She has also written a memoir, Crazy Brave(W. W. Norton, 2012), which describes her journey to becoming a poet, and which won the 2013 PEN Center USA literary prize for creative nonfiction.

Also a performer, Harjo has appeared on HBO’s Def Poetry Jam in venues across the U.S. and internationally. She plays saxophone with her band Poetic Justice, and has released four award-winning CD’s of original music. In 2009, she won a Native American Music Award (NAMMY) for Best Female Artist of the Year.

Harjo’s other honors include the PEN Open Book Award, the American Indian Distinguished Achievement in the Arts Award, the Josephine Miles Poetry Award, the Mountains and Plains Booksellers Award, the William Carlos Williams Award from the Poetry Society of America, and fellowships from the Arizona Commission on the Arts, the Witter Bynner Foundation, and the National Endowment for the Arts.

Most recently, she received the 2015 Wallace Stevens Award for proven mastery in the art of poetry by the Academy of American Poets. About Harjo, Academy of American Poets Chancellor Alicia Ostiker said: “Throughout her extraordinary career as poet, storyteller, musician, memoirist, playwright and activist, Joy Harjo has worked to expand our American language, culture, and soul.  A Creek Indian and student of First Nation history, Harjo is rooted simultaneously in the natural world, in earth—especially the landscape of the American southwest— and in the spirit world. Aided by these redemptive forces of nature and spirit, incorporating native traditions of  prayer and myth into a powerfully contemporary idiom,  her visionary justice-seeking art transforms personal and collective bitterness to beauty, fragmentation to wholeness, and trauma to healing.”

Big Read memes: Created by the LGAA and posted on Facebook. All quotes are lines from poems in Harjo’s book How We Became Human. Please feel free to share them. 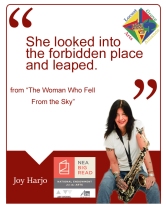 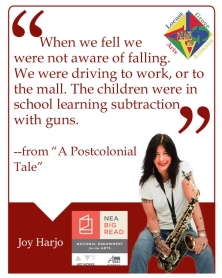 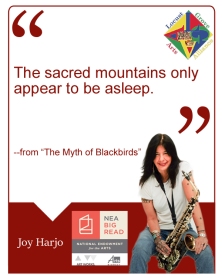 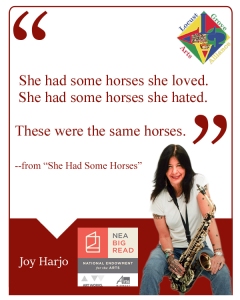